Proof That The Chiefs Cheated To Win Super Bowl LIV

Proof That The Chiefs Cheated To Win Super Bowl LIV 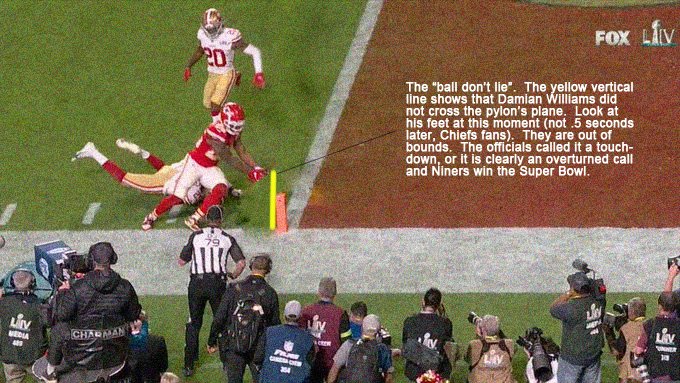 In this post I will prove that the Chiefs cheated to win Super Bowl LIV.

One of the greatest athletes in America’s history, Jerry Rice, was not rubbed the right way with this one and if this happened to the Chiefs, they would have every right to complain too.

So far we are looking at a 14 point turn around with two bad calls. That already puts the Niners up by 14 points.

Look, KC Chiefs fans, everyone is happy that for the first time in fifty years you get to the big game. But that does not mean you cheat to win it.

Chiefs fans are trying to deny the evidence in front of them like it does not exist. I know Kansas is a little behind on the times and that electricity is still being spread throughout the state (they had to have their parade in their ‘Powered Lights District” because apparently all of Kansas City does not have electricity, which is somewhat comical if not sad), but if you have a phone or even a light bulb you can see the evidence in front of you, day or night.

That leads to probably the most blatant penalty of this game: the targeting of Jimmy Garappolo.

All over the Internet, you will find the Chiefs fans on social media bragging and preparing for their dynasty. And if this is how it’s all called, they are right. Mahomes will probably go on and win 7 or 8 Super Bowls. Who can stop these guys if they can get away with this stuff?